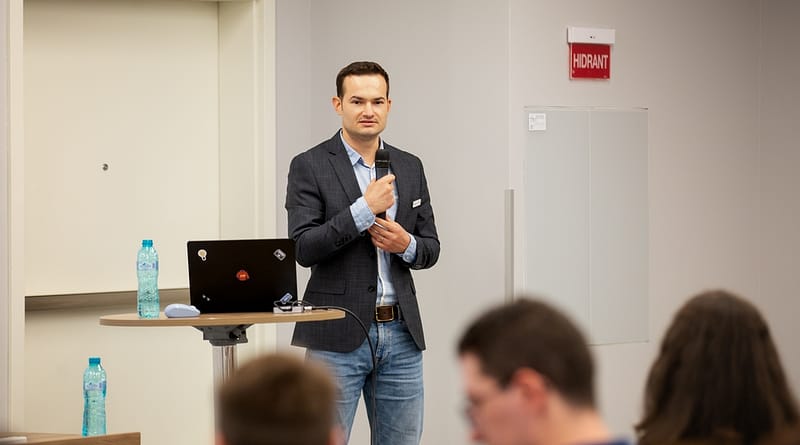 I am very happy to have been given the opportunity to speak at this woderful event organized by the WorryLess.VoiceMore community built around Hiroket.

Getting In & Moving Up for Women in IT is the first public event I’ve been invited to speak as a LinkedIn employee.

Neither a #woman , nor an #engineer , nor a big promoter of #genderequality . So how did I end up there?

Well, firstly because the unbelievable Ruxandra Irina Ciocîrlan believed I could pull it off.

Secondly, because the super-determined Andreea Tanase did not opose it (ha-ha).

And thirdly, because LinkedIn was paramount in the process of making my most spectacular career transition ever. Long before I even became part of the company.

I am convinced that the (almost) unlimited resources of the platform can be harnessed by any professional, regardless of their backgrounds, interests and visions. Just as they worked for me.

And this is what I tried to convey to the 100 participants at this third edition in Bucharest. After all, this was about “doing your best to own your thoughts and master control regardless of circumstances”, as the organizers put it.

I am enormously grateful to all those involved and thrilled about the dialogue we’ve established during and after the event!

This site uses Akismet to reduce spam. Learn how your comment data is processed.

This website uses cookies to improve your experience while you navigate through the website. Out of these cookies, the cookies that are categorized as necessary are stored on your browser as they are essential for the working of basic functionalities of the website. We also use third-party cookies that help us analyze and understand how you use this website. These cookies will be stored in your browser only with your consent. You also have the option to opt-out of these cookies. But opting out of some of these cookies may have an effect on your browsing experience.
Necessary Always Enabled
Necessary cookies are absolutely essential for the website to function properly. This category only includes cookies that ensures basic functionalities and security features of the website. These cookies do not store any personal information.
Non-necessary
Any cookies that may not be particularly necessary for the website to function and is used specifically to collect user personal data via analytics, ads, other embedded contents are termed as non-necessary cookies. It is mandatory to procure user consent prior to running these cookies on your website.
SAVE & ACCEPT